This past week was Surgery Education Week, the annual joint meeting of the Association of Program Directors in Surgery and the Association for Surgical Education. It’s a meeting that I first attended in 2001 and I haven’t missed a year since. I say that not as a point of boast, but to highlight my enthusiasm for this meeting; a week with people who share a passion for all things surgical education is professionally reinvigorating.  This year it definitely happened at the right time for me to get my bearings back.

My friend Chris Brandt was our ASE president this year, and he delivered a personal and heartfelt Presidential address on Thursday. Within the context of his speech, he asked an important reflective question for me as an educator, and one that I suspect will resonate with many of you:

Some of us fall into teaching semi-naturally; for me, it started with Vacation Bible School and helping in preschool Sunday School while I was still in high school, then teaching preschool part-time for part of College.  I  taught while I was in graduate school (if you haven’t read Dr. Seuss’ Butter Battle Book, you obviously weren’t in one of my international relations sections), and the one thing I knew in medical school before I was certain that I wanted to be a surgeon was that I wanted to teach.

For me, it’s the idea of paying it forward.  I’m certainly not going to wax philosophical about how every single teacher I’ve had has been amazing- that would be a flagrant lie. That said, I can tell you about my teachers who really made a positive difference for me. Steve Hoemann (English, 7th Grade). Carole Buchanan (World History, 10th Grade). Louise Bianchi (Piano teacher, 9th-11th Grade). Claudine Hunting (French professor, Undergrad). Mike Ward (Advisor/ International Relations, Graduate school). Jim Knight (Leadership in Medicine, Medical School). Danny Custer (Pediatric Surgeon, Medical school- I “blame” him for my career in surgery!). There’s one common thing that each of them did and that I value immensely: they made me better in some way. I know that I would not be who I am doing what I do in the way that I do it without this group of people, only two of whom actually knew each other. I also know that I am fortunate that they believed in me enough to challenge me, enough to push me out of my comfort zone, because they saw potential.

Because now it’s my turn to find that potential in learners, to nudge them out of their comfort zone, to help them be better.

Besides, the emails and notes that you get for this are pretty awesome. I can’t read any of them without smiling and thinking, “THIS.  This is why we put in the extra effort, the extra thought, the extra time.”

So, what’s your story? Why teach? 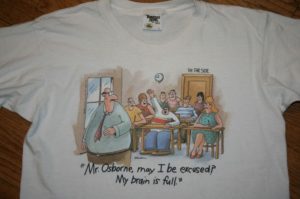 This t-shirt admittedly is one of my very favorite Far Side cartoons, and is an idea that has occurred to me more than once.  It impacts how we function in our responsibilities, and it definitely impacts how we learn.

“Cognitive load” is a tricky thing. It influences our working memory, or how we process information.  Although many of us would like to believe that our working memory is both broad and durable, the truth is that it can’t contain more than 4-5 items in it at one time, and that the items there last at most for 10 seconds. That sounds suspiciously like a Twitter feed, doesn’t it?

Most importantly, working memory is impacted by the complexity of information or the complexity of tasks that we are trying to manage in any given moment. In surgical education, we feel this as a learner when we’re trying to perform a skill that is new to us and we are distracted with a question, a page, or just something noisy happening in the corner of the room. Interns, if you find that you suddenly stop what you’re doing while suturing a wound when the attending asks you a question…well, it’s pretty normal.  Suturing isn’t something that you’ve likely automated at this stage of your career.  The distraction of the question, particularly if the question contains somewhat complicated information, can easily result in you needing to hit the “pause” button- which is easier to do with the suturing than it is with the question you’re being asked by a 3rd party. Even those of us with more experience still have certain operations or parts of cases when we’ll ask to not have any disturbances unless they are life and death; as an example, anytime I am grafting a pediatric hand, I make a request to not be disturbed unless it’s completely necessary. Anyone who has put a skin graft (or many skin grafts) on a hand of an 18-month-old understands how complex and intricate that is, and why even with experience we don’t necessarily have the brain “space” to be disturbed.

The other interesting bit about cognitive load relates to multitasking, which we are essentially being asked to do in the above scenario.  If you are suturing, you’re likely to pick up speed as you go along because you are repeating the task. However, if you are interrupted by a question while you are suturing, you have two options:

If either choice in option 2 occurs, the switching between tasks makes you slower at both tasks.  Essentially, there is a cost to switching between activities.  This difference may be so small as to almost be imperceptible, but it is real.

As educators, what can we do to help our learners manage cognitive load and not exceed their brain bandwidth (or become frustrated by trying to do too many complicated things at one time)?

Our job? It really boils down to figuring out how to create an environment that will support learners doing their job- even if there is a bit of stress added to that system.

Wednesday during the academic year always gives me the opportunity to consider grand rounds- the history, the why, the how could we be doing this better (since we all know that’s one of my favorite questions about almost everything). Today and last Wednesday served as no exception; the prior Wednesday was a break from my incessant questioning, mostly because I was away at Surgery Education Week.

Historically, grand rounds were Socratic in nature, and focused around patient presentations (usually by a junior team member) to more senior faculty.  Often the patient was present, and the presentations were oriented around problem-solving of the cases.  Attendance at grand rounds was expected as part of one’s civic duty in academia and the interactive nature fostered engagement through active learning.

Fast forward to the present- and I’ll open with a confession that I can be complicit in any/ all of these on a given day. Grand Rounds is typically a Power Point (or Prezi, for the more hip) based lecture, hopefully with a few minutes left for questions at the end. Minimal interaction occurs, and the audience engagement often reflects the paucity of direct interaction. Email gets answered, EMR charting gets caught up. Even those who are engaged and attentive are likely to retain no more than 5% of the information provided. The modern model allows people to share from a place of expertise, and for those in the audience it’s typically a fine exhibition of passive learning.

A side effect of the failure of engagement in modern grand rounds is a lack of attendance; if people’s learning needs aren’t being met, they simply vote with their feet and stop coming.  Multiple sources have bemoaned decreased attendance at grand rounds in particular, and educational conferences in general, by faculty members.  Sometimes those absences are unavoidable and are driven acutely by patient needs. Often they are simply a reflection of perceived relevance of the day’s topic, with citizenship “obligations” being inadequate to overcome the pull to take care of the myriad other things on the to-do list during that sheltered hour.

Grand Rounds in some form is likely a tradition worth maintaining, both for the citizenship/ networking benefits, as well as for educational benefits when it’s done well.  The question becomes how do we resuscitate grand rounds before it’s too late? Better coffee?  Bigger controversies? More interaction?

I’m not sure I have a single perfect answer, though I hope to open a dialogue on how we can best identify and meet the needs of our learners.  My suspicion is that it won’t involve a long-term relationship with the lecture format, and it might even entail a return to old traditions with entirely interactive, case-based sessions. Or it might be something entirely different and entirely unexpected- something revolutionary, perhaps?

If you were designing an effective grand rounds for your Department of Surgery, what would it look like?

Anyone who has been in the OR or in the ICU during a procedure is familiar with the concept of the “time-out.”  It’s something that has been around for a number of years and came into being as a way to enhance patient safety in the operating room.  The operative time-out itself continues to evolve, with many surgeons developing an “extended time-out” checklist for their OR, something I can definitely see benefit to doing.  For the last week, I’ve experimented with a variant extension to the time-out; when we were at the American College of Surgeons my friend  Mary Klingensmith Tweeted a challenge to the surgical education community to incorporate

an education time-out at the beginning of cases for their learners.  I’ve been trying to find ways to increase the teaching focus in the OR, and this seemed an almost foolproof way to do it.

The education time-out in our OR occurs just after the patient safety time out.  I identify each resident of medical student on the operative team, and I challenge them to tell me what their learning goal is for the case.  Goals provided by learners last week were sometimes technical, sometimes about decision-making, and sometimes related to the patient’s overall medical status but have little to do with the operation itself.  During the course of the case, I seek to address the questions raised by each learner, using a largely Socratic method (yes, I am still asking questions of them!).  What benefits do I see a week into this “experiment”?

I’m still trying to perfect the system, and I am curious to take a good look at how it impacts both teaching and learning in the OR over time.  From a subjective and personal evaluation, I’m finding the education time out to be an important improvement in my work as both a clinician and an educator.  Surgical teachers, give it a try and I hope you’ll share your experience.  Surgical learners, encourage your teachers to try it. They might just find themselves with an important new teaching tool!

If want an alternative approach to using the five teaching microskills, there are also five terrific open-ended questions that you can ask as a teacher:

Clearly these questions can tie back into many of the ideas behind the One-minute Preceptor so they provide a nice alternative approach.  However, one VERY important general principle for you as a clinical teacher, regardless of the approach you choose?

Give your learners enough time to formulate an answer.  Particularly if you are a surgeon, wait about twice as long as you are inclined to wait- we tend to expect answers very quickly, which is appropriate in an urgent situation but doesn’t serve us well when we’re trying to foster clinically thoughtful learners and assess their reasoning skills.  Learn to lob the question out there…then wait.