Wednesday during the academic year always gives me the opportunity to consider grand rounds- the history, the why, the how could we be doing this better (since we all know that’s one of my favorite questions about almost everything). Today and last Wednesday served as no exception; the prior Wednesday was a break from my incessant questioning, mostly because I was away at Surgery Education Week.

Historically, grand rounds were Socratic in nature, and focused around patient presentations (usually by a junior team member) to more senior faculty.  Often the patient was present, and the presentations were oriented around problem-solving of the cases.  Attendance at grand rounds was expected as part of one’s civic duty in academia and the interactive nature fostered engagement through active learning.

Fast forward to the present- and I’ll open with a confession that I can be complicit in any/ all of these on a given day. Grand Rounds is typically a Power Point (or Prezi, for the more hip) based lecture, hopefully with a few minutes left for questions at the end. Minimal interaction occurs, and the audience engagement often reflects the paucity of direct interaction. Email gets answered, EMR charting gets caught up. Even those who are engaged and attentive are likely to retain no more than 5% of the information provided. The modern model allows people to share from a place of expertise, and for those in the audience it’s typically a fine exhibition of passive learning.

A side effect of the failure of engagement in modern grand rounds is a lack of attendance; if people’s learning needs aren’t being met, they simply vote with their feet and stop coming.  Multiple sources have bemoaned decreased attendance at grand rounds in particular, and educational conferences in general, by faculty members.  Sometimes those absences are unavoidable and are driven acutely by patient needs. Often they are simply a reflection of perceived relevance of the day’s topic, with citizenship “obligations” being inadequate to overcome the pull to take care of the myriad other things on the to-do list during that sheltered hour.

Grand Rounds in some form is likely a tradition worth maintaining, both for the citizenship/ networking benefits, as well as for educational benefits when it’s done well.  The question becomes how do we resuscitate grand rounds before it’s too late? Better coffee?  Bigger controversies? More interaction?

I’m not sure I have a single perfect answer, though I hope to open a dialogue on how we can best identify and meet the needs of our learners.  My suspicion is that it won’t involve a long-term relationship with the lecture format, and it might even entail a return to old traditions with entirely interactive, case-based sessions. Or it might be something entirely different and entirely unexpected- something revolutionary, perhaps?

If you were designing an effective grand rounds for your Department of Surgery, what would it look like?

This week, I have heard two different stories about limitations being placed upon interactions with medical students by institutions.  To be completely honest, they both strike me as horror stories with a Draconian response to managing power dynamics.  First, I was told that at a major medical school that very strict limits were placed on what residents and faculty are allowed to ask medical students to do.  This was followed in short order by learning that at another medical school the resident or faculty member has to explicitly ASK the medical student if they can ask them questions to assess their learning.

I had recently been flabbergasted, reading about the climate in higher education at many institutions and concerns expressed by students about having their fundamental understanding of the world disrupted.  And now, this piece in The Atlantic talking about the damage being done long-term to learners who are being overly-protected in their university environments since their professors can no longer teach them how to think.

For anyone who has been wondering why their interns aren’t always well-prepared to be a doctor on Day 1, I may have hit upon the “why.”  I understand that questioning can occur in ways that are not conducive to learning and that can even be disrespectful to the learner in some way; I’ve seen it done.  This is the exception, however, and often occurs in conjunction with other marginally professional behaviors.  It seems that some medical schools have, in the interest of preventing “student mistreatment”, created an environment where their teachers are denied any of the tools available to assess clinical reasoning.  If I may ask a question, how am I supposed to assess a trainee’s clinical acumen if I can’t ask them to walk me through their thought process?

I spend a tremendous amount of time discussing that we are behind the curve in medical education, where we still focus on single right answers and MCQs to assess knowledge that is largely based upon retention of facts.  We test this way in a day and age when we all have easy access to facts, and in a time when the rate of knowledge acquisition cannot be matched by the human brain.  If we are going to move beyond testing for facts- knowing that factual knowledge does not necessarily a good doctor make- how do we prepare learners for a new world order focused on clinical knowledge application if we cannot ask them to solve clinical problems?

More importantly, how do we turn back the tide?  I’m not saying that we should yell questions at our students and residents, or that we should ostracize and humiliate them when they don’t know answers.  But as educators, if we are going to responsibly create the next generation of physicians, we must be able to engage in questioning in a way that is both meaningful and constructive.  Draconian solutions in which we’re simply not allowed to ask learners questions will have huge- and negative- impacts on the care we are all able to receive in time.

Labor Day seems to mark the last hurrah of summer, and I’m looking at it that way as well this year.  Granted, the academic year I am part of started two months ago, so for me it’s less about those patterns and more about the change of seasons, the setting of new intentions.

My theme for the summer has definitely been going new places and trying new things.  I’ve pushed myself outside of my comfort zone in many ways- running 3 half marathons between May 16 and August 8, changing up how I train under the tutelage of my amazing running coach, wandering off to three new-to-me places to explore and enjoy with friends, and going to Cowgirl Yoga “camp”.  I’ve learned more in the last 3 1/2 months about me, about goal-setting and intention, about life than I have in a long time, largely because pushing out of your comfort zone essentially mandates that you learn.   Examples?

-I’ve learned that the half marathon distance is great for me.  It’s long enough that it is truly a challenge and I feel like I’ve accomplished something by running those 13.1 miles.  I also don’t leave it so miserable or so burnt out from my training that I don’t want to go back to the well for more (as evidenced by the half marathon that recently magically appeared on my schedule later this month, even though I swore I was done until December).  It’s that running “sweet spot” for me, balancing something that is hard with being something that is doable.

-I’ve learned that I apparently show a strong resemblance to a 13-year-old girl when given the opportunity to ride horses.  Given the majesty of the horse, how can you not feel some sense of almost boundless joy in being able to work with them?  We could all use more joy like that, and I’m grateful I’ve been able to experience it some this summer.

-I’ve learned that while I am incredibly curious about almost everything, I tend not to ask questions.  I get quiet.  I take things in.  I observe.  And only once I have clarity on the parts I can’t figure out by watching, I ask.  I’m going to experiment with asking more, even though observation is absolutely fascinating.

-I’ve learned that my intuition is to be trusted.  Culturally we are so attuned to science and fact and trying to ignore that “spidey sense.”  We shouldn’t ignore it, or at least I shouldn’t.

It’s been a pretty amazing summer in terms of where I’ve been and what I’ve done, not to mention how much I feel like I’ve grown.  Now to figure out what those lessons mean and how to incorporate them into the everyday… 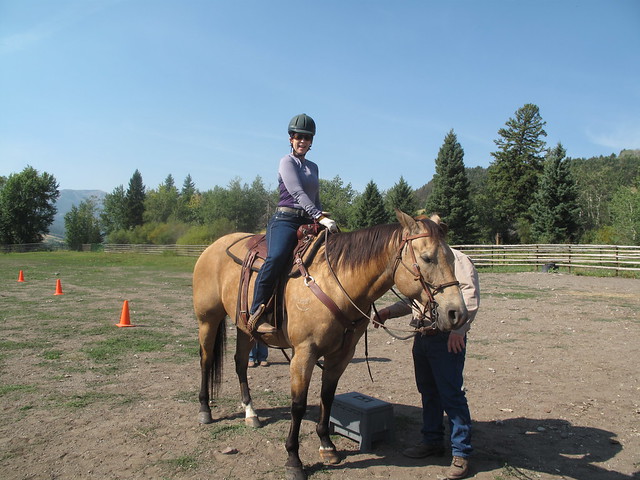 I’ll open by saying that stagnation and lack of motivation are not currently an issue for me professionally- if anything, it’s sorting through these choices that I have made (and all of which are important to me) and not feeling overwhelmed. Staying motivated and feeling listless about how I contribute is not a struggle…right now.

About six weeks ago, there were nearly simultaneous pieces in the HBR and the Chronicle of Higher Education discussing what happens once we achieve something that’s been the brass ring for a length of time.  For many of us in academia, it’s that day when we find out that we’ve been promoted and received tenure.  For my friends in the business world, it’s a big promotion; for attorneys, it’s achieving partner.  You get the idea.  There’s this thing out there- whatever it may be- that represents high achievement in our professions.  So, we get there.  Then what?

In my usual “completely honest” fashion, I suffered from post-tenure depression.  After spending the first several years of my career in academic surgery trying to episodically balance inquiry/ publication, teaching/ education, clinical work, and administration in a fashion that kept me on the pathway to promotion.  And I did wake up thinking, “What now?”  I also realized that, quite honestly, I was tired.  Not completely exhausted and depleted, just tired and in need of a recharge.

After wallowing in this for a bit and wondering if this was finally my chance to become lazy, I woke up one day and realized that the whole point of tenure is to have academic freedom.  So much for that lazy idea…but hooray for being at a point that allows me to choose what my next great work will be.  I’ll also admit now that I’ve settled into this role in the last couple of years (and have used my “security” to pursue work examining disruptive surgeon behavior and the status of women in academic surgery, both using qualitative methods) and have realized that if anything it’s harder.  I have a greater need for time and space to think; I have more difficulty finding that time and space.  My goals are less set for me; I have more opportunities to seek broadly.  Most importantly, it’s my responsibility to stay hungry- no one else can provide that internal drive and inherent curiosity that is ultimately required to make a difference in our profession or in the world.

Right now I’m in the process of changing up how I do my white board in my office.  I’m working on embracing my productivity style as a “visualizer” (no wonder OmniFocus was such a dismal failure for me!).  I’m embracing new roles and responsibilities that require my very best leadership and more creative problem solving than I anticipated.  I’m writing my mentors thank you notes because I realize what a challenging role that is.  And right now, even though it’s a bit late, I’m going out for a run.  It’s time to clear my head.