Prior to 10-15 years ago, the idea of checklists in medicine seemed ludicrous.  After all, the solution to a problem isn’t a piece of paper.  Or is it?

As an intensivist, I work in the clinical environment with the most evidence for checklists.  Thanks to the extensive work of Peter Pronovost, who has committed his career to quality and safety in patient care, a variety of checklists in the ICU setting have been shown to be of benefit.  My personal favorite is the daily goals form for ICU rounds, though I will also confess that this has proven challenging to implement in my own environment.  Culture change is tough. His work that has had the most broad reach is his work on reducing central line associated bloodstream infections (CLABSI), a key component of which is an evidence-based checklist.   This checklist has subsequently served as the foundation for the Michigan Keystone Project, a statewide quality improvement effort that has generated amazing amount of scholarly activity as well as a dramatic reduction in CLABSI rates.

Atul Gawande, surgeon-author extraordinaire, became interested in this idea of checklists.  He wrote a 2007 piece for The New Yorker.  This later served as a foundation for his book The Checklist Manifesto.

IN 2009, NEJM published the findings of a prospective, multicenter implementation of a 19-item surgical safety checklist (Gawande is part of the author group).  This checklist was implemented in highly diverse clinical settings, and the authors from the Safe Surgery Saves Lives group showed a significant reduction in both mortality and in-hospital complications in patients who received care following checklist implementation. 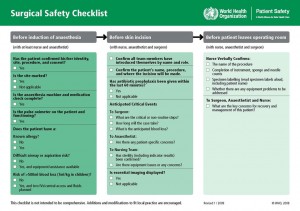 While arguments can be made about the potential for Hawthorne effect impacting the findings, the results were still impressive- particularly so since this was implemented in not just economically developed countries, but in low-middle income countries as well.

In the last month, more data have been published about the effect of a surgical safety checklist.  A systematic review and meta-analysis in the British Journal of Surgery indicated that current publications are “highly suggestive” that the WHO list reduces both mortality and complications, but bemoaned the lack of higher quality studies that would allow a definitive recommendation.  Then, this week from Ontario comes a multi institutional study showing at best equivocal differences in complications and mortality.  While this large study does bring into question the efficacy of surgical safety checklists, the accompanying editorial from Lucian Leape takes a pragmatic approach to these findings, focusing on a variety of reasons why the Ontario study might have the findings that it does.

My current institution does have a mandated preoperative time-out, but we have not yet adopted the WHO safety checklist or a modification thereof.  If we do move in that direction, significant stakeholder buy-in is crucial to minimize “gaming” of the system.

And as a disclosure, our ICU committee just approved a central line insertion checklist that I’ve spent the last 8 months developing, revising, sharing with colleagues, revising again…so yes, I am a believer in checklists.  I believe in patient safety, and I believe in the fallibility of humans.  While a checklist can’t make us perfect, it certainly appears likely to allow us to reduce errors in complicated care to an absolute rarity.