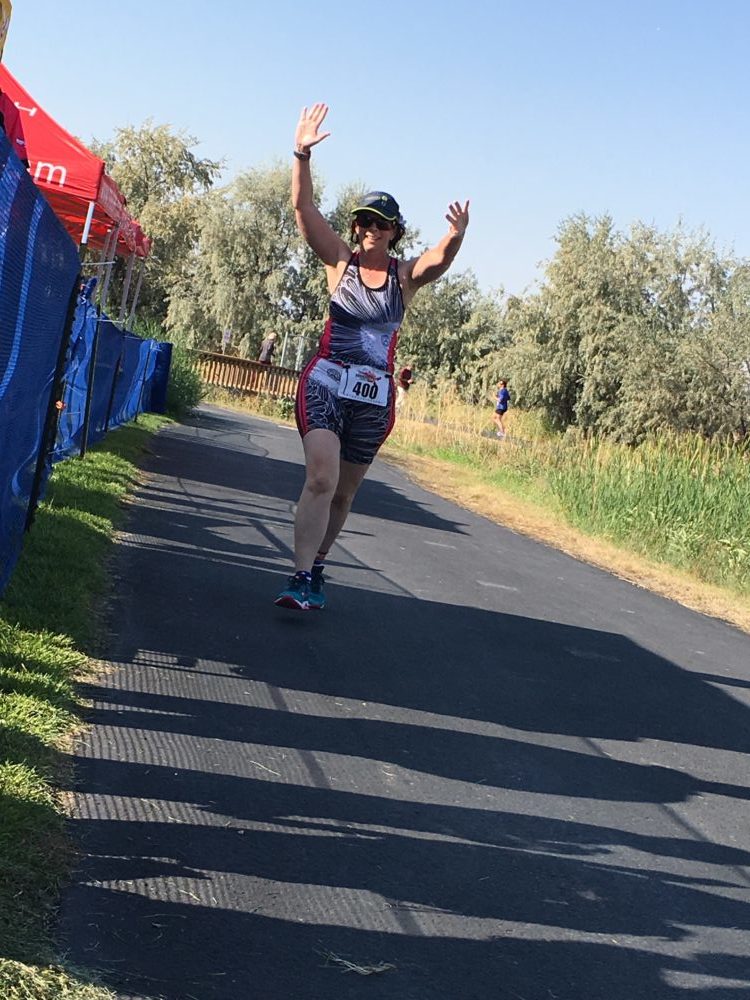 I had good intention of getting this post up early in the week.  And, like many good intentions, it’s now Friday…but I’m still within a week of doing something a little scary (for me) so it’s still sort-of news.

In July and August I took part in a fitness challenge that encouraged us to try activities that were new or different from our “usual.” I’ll confess that new things I have now tried include mixed martial arts workouts (hard and fun!) and ballroom dance workouts (harder than you expect! and good grief I’m not a dancer!). Most importantly, this challenge got me into the pool a few times and reminded me that I’m actually a reasonably competent swimmer.  And, interestingly, when I’m not swimming because it’s all I can do with an injury, I kind of like it.

Since I have a history with both cycling and running, some of you might see where this swimming revelation is leading. I haven’t totally pushed myself outside of my comfort zone since my first half marathon (December, 2014, for those who are keeping score), and I’ve been trying to figure out what I could take on that would challenge me.  Semi-logical answer?  Triathlon!

So, with only about four weeks to get swim training under my belt I signed up for the Brineman, sprint distance.  I put a few bricks- riding followed by some running- into my workout schedule. I stayed up late deciding if I needed a wetsuit for the race or not (decision was yes, and with the 45 degree temps that morning I was grateful!).  I ordered the cutest (and most functional) tri kit ever to wear and tested it out during my brick workouts. I practiced open water swimming in the Willamette River when I visited Portland over Labor Day weekend because that was the truly intimidating part of this whole crazy idea for me.

And last Saturday, I got up really early so I could swim, bike, and run. I was incredibly fortunate to have three friends who signed up to do the Sprint as a relay so I had an awesome cheering section.  And… another of our friends who has been on “injured reserve” from running magically appeared at the swim start and helped to sherpa gear, take great pictures, and cheer for all of us.  I know some of y’all have heard me say, “Find you tribe, love them hard” before, and Saturday morning they were there full-force.

Here’s the before.  And yes, I’m thinking, “I don’t have to do this…it’s not too late to chicken out!” when I’m standing there contemplating it all. 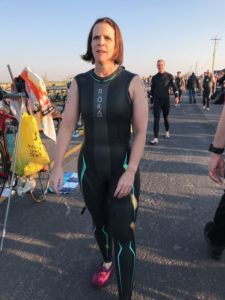 Once I was out of the water (I just don’t want to discuss it other than my celebratory phrase being,
“I didn’t drown!”; in truth my performance in the water was Very Respectable), it was on to the bike.  Confession: this is my favorite leg.  Shh…don’t tell the people who think of me as a runner. Also, I love the dryland segments because of all of the cheering one another that goes on between athletes.  If you’ve run or ridden with me, you KNOW how I am about encouraging people! 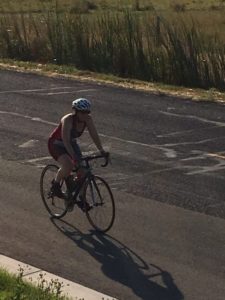 Then, the run.  The part that I know I can do and can do without trouble (3 miles is NO problem!). And I can’t tell you how much I loved the folks who commented, “Looking strong!”  That’s such a powerful reminder that yes, I’m strong, and I’m rocking this.

If you’re wondering, yep, I’ll do this again, and with more than a month to train for swimming I’ll even look at a longer distance. I mostly loved it. I learned a lot about myself and my ability to be brave.  And I was totally outside my comfort zone (swimming, people, swimming) and did a Really Good Job with my first triathlon.

What’s my hope in sharing this story with you? Don’t be stagnant! What’s something that you can do that will challenge you, maybe even make you uncomfortable? Set a goal.  Go for it. That’s how we change ourselves.

1 thought on “Step outside your comfort zone. Do scary stuff.”