Last week was the Academic Surgical Congress, the annual joint meeting of the Association for Academic Surgery and the Society of University Surgeons.  I’ll start by being very honest:  as someone who didn’t go to medical school or complete my residency at a “powerhouse” program, I’ve historically been a little intimidated by the meeting.  There are LOTS of heavy hitters there with long pedigrees.  The other issue for me has been that I’m in a somewhat unusual clinical specialty (there simply aren’t that many in academic who identify as “burn surgeon”), and my scholarly focus has been education.  Historically, that education focus has not been something enthusiastically welcomed by the Academic Surgical Congress.  Justin Dimick, the President-Elect of the AAS, and I were discussing being at this meeting many years ago when I was one of two or three people presenting education work.  He was building his already-impressive career as an outcomes/ health services researcher, something which also wasn’t quite yet in vogue (though certainly was moreso than education research).  It was a lonely-ish place for both of us, something that is blissfully no longer true.

In 2013, I got plugged in to be part of the official “Twitter Team” for the ASC, which threw me together with this amazing crew:

For the record, those are my illustrious coauthors for the presentation I posted last Thursday on the use of Twitter at the 2013 Academic Surgical Congress.

This year,  I arrived and almost immediately got to reconnect with these two friends and colleagues: 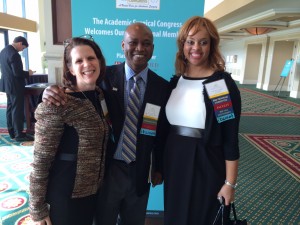 And, of course, we had our mandatory “Tweet-up” (which only captures a handful of those who engaged with social media during the meeting): 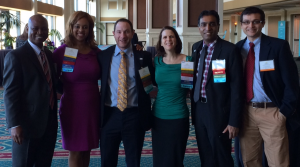 I attended paper sessions, I participated in a panel on Transitions to Practice Programs in surgery (more on that in a week or two!), I got far more credit than I ever expected for being innovative with my use of social media, and with this blog in particular.  I got to catch up with friends and I made some new friends.  We’re incubating some more SoMe projects (Twitter journal club, people- hang on to your hats!) and kicking off some new research collaborations.  I helped a couple of people get started on Twitter.  I had a fangirl moment meeting Skeptical Scalpel.  I got teased by a colleague for having my iPhone open to my Twitter account- while it was sitting on top of my Bullet Journal (which is, yes, entirely analog, and I love it).  I was moved by a quote from Hiram Polk, in which he stated, “Build your friendships…because these are the people you will know and work with for the rest of your life.”

In short, I built my friendships.  I engaged.  I had fun- yes, fun- at a surgical meeting.  There was a vibrancy, an enthusiasm at this meeting that was invigorating.  New ideas weren’t just being tolerated, they were being embraced.

Oh, and I wasn’t intimidated at all by those people with “better” pedigrees than mine.  As it turns out, we all put our pants on one leg at a time, and we’re all just trying to push surgery forward in terms of patient care and mentorship for those coming behind us.

1 thought on “Recharged and recommitted”